The Company of Rogues finally knows the identity of the mastermind behind a plot against the queen—but their enemy is still one step ahead of them. When he kidnaps one of theirs, the Rogues plan a daring rescue mission that will lead them into the heart of the bloodthirsty Crimson Court.

It’s a job for a master thief, and there’s nothing Charlie Todd likes more than a challenge. To pull off the impossible, Charlie needs a crew, including the only thief who’s ever been able to outfox him.

He broke her heart. But now she must risk it all to save his life…

Lark’s spent years trying to forget her past, but the one thing she can’t ignore is the way a single smile from Charlie still sets her heart on fire. When he proposes they work together again, it feels just like old times, but she has one rule: this is strictly business.

It’s Charlie’s last chance to prove he can be trusted with her heart. But Lark’s keeping a deadly secret. And as passions are stirred and the stakes mount, it might be the kind of secret that could destroy them all…

BEC MCMASTER grew up on a steady diet of 80’s fantasy movies like Ladyhawke, Labyrinth and The Princess Bride, and loves creating epic, fantasy-based worlds with heroes and heroines who must defeat all the odds to have their HEA. If you like sexy, dark, paranormal romance, try her Dark Arts series; for some kick-bustle ladies-saving-the-day steampunk romance then check out London Steampunk; and for rocket-fuelled post-apocalyptic romance with a twist on the werewolf theme, then see her Burned Lands series.

Bec has been nominated for RT Reviews Best Steampunk Romance for Heart of Iron (2013), won RT Reviews Best Steampunk Romance with Of Silk And Steam (2015), and Forged By Desire was nominated for an RWA RITA award in 2015. The series has received starred reviews from Booklist, Publishers Weekly, and Library Journal, with Heart of Iron named one of their Best Romances of 2013.

Join Bec’s newsletter for all the latest news on releases, exclusive excerpts and cover reveals, and get your copy of ‘Tarnished Knight’, a novella in her award-winning London Steampunk series. Copy and paste this link into your browser: http://eepurl.com/F_LkD

I came in late to The Steampunk Conspiracy game. Don’t judge me, but I did. The plus side, though, the author fills you in on all of the action you missed in the previous novels through a quick synopsis at the beginning of the book and throughout the novel. This, obviously, a huge relief for me trying to catch up on it and the original series: The London Steampunk.

Here is an excerpt to fill you in on who the rogues are:

“The Duke of Malloryn puts together a highly-skilled team of individuals (human, mechs, and rogue blue bloods) to combat a mysterious threat against the queen, and the Company of Rogues is born.”

Each of these books are set in a world where vampires are considered “blue bloods” and there are different courts where they dwell. The Crimson Court is a common threat to the blue bloods who fight for justice and peace. In this book, The Duke of Malloryn, is kidnapped and held captive within the dark Crimson Court. The Rogues are notified and decide to send one of their best to rescue the Duke and also recruit an old flame of his to tackle the task.

Charlie and Lark have a complicated past. Charlie broke her heart by choosing another woman over her and disappearing. Lark, in turn, went on her own path, acquiring a long list of secrets in her wake. Oh my gosh the secrets!

The plot is solid, adored the characters and the chemistry surrounding them. I felt for Lark, I truly did. I can understand her coldness toward Charlie and being resistant to him even though her hidden feelings fought against her. The events unfolded organically, no stone unturned. Usually characters were as many secrets as Lark would tend to get taxing, but this was completely the opposite.

Everything came around full circle and I’m definitely going to be looking into the previous books! Love steampunk and vampires with a dash of sexy rogues? Take this series and go! 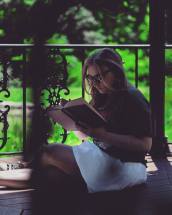