And so it continues….It’s been almost over a year since I touched base on The Otherworld Series by Canadian author Kelley Armstrong. I have traveled a long, rocky road paved by books I’d rather would not have read and those I’ve quite enjoyed. All of them, though, have eventually led me to get back to here. Before you continue, if you need to catch up with the info on the first book, Bitten, you can find my original review here.

I took a break after reading the fourth book, Industrial Magic, to read another series. I still feel bad I didn’t continue but that stops now! (After I’m finished reading the three books I’m still reading. The life of a book addict is no joke) This series is like that best friend you can not talk to for the longest time then all of a sudden you pick it right back up and it was as if you didn’t stop talking. So far, Stolen is my favorite out of the series.

Author Kelley Armstrong uses this novel as a bridge for future supernatural characters to rise up out from the background to introduce themselves to readers. The downside is that they did not reveal themselves without a fight. We meet back up with Elena Michaels, the world’s only female werewolf, along with her pack, in search for an individual who allegedly spotted a werewolf. For the werewolf community, once a human sees them transform or gather evidence of their existence, it is Elena’s job to seek them out and murder them. She travels to Pennsylvania to discover not a human, but a young witch named Paige Winterbourne. Paige admits her deception in order to lure Elena out to inform her not only of other supernatural’s existence but to alert her along with her pack of danger.

Despite her disbelief, Elena and her pack leader  Jeremy meet up with a variety of other creatures including a half-demon, a vampire, and another witch. I remember when I first read this, how Elena and I were on the same line of humor. Imagine a book club who was really a bunch of supernatural creatures meeting one another in secret. Only, it’s actually happening. Anyways, it’s revealed that a millionaire Tyrone Winsloe is kidnapping a variety of supernaturals, testing them, then (possibly) killing them.

Elena does not know what to believe till after the meeting, Elena and the others are almost kidnapped by military trained soldiers but are able to escape. Long story short, Elena ends up kidnapped after having a car race against her lover, Clay. She is whisked away into an unknown location inside a massive compound where she’s placed under massive tests on her lycanthrope abilities. She soon discovers a young half-demon, half-witch child named Savannah Levine is being used in order for them to discover the variety and range of her undiscovered powers.

This whole novel is a topsy-turvey suspenseful piece of literature. I could NOT put it down. At the time I read it, I was still in college and any time I had to pause to do a class project, I longed to pick it back up. The romantic element between Elena and Clay prove yet again that no matter how far away from each other, they will always fight to get back to one another. The emotional levels are extremely high throughout this book not only involving them but the characters that die (will NOT spoil). However even though I hated certain characters dying, these events needed to happen. They pave the way for the story to continue from Elena’s story to Paige Winterbourne’s story in the next book.

“I wanted to tell him everything would be okay. And I wanted him to tell me the same thing. I didn’t care if it was true or not-I just wanted to say it, to hear it, to feel his arms around me, hear the rumble of his words, that deep chuckle that made my pulse race.”

10 out 0f 10 Book Charms, all the way. I’m going to catch up with this series reviews, I will. I apologize for being behind on them. With a world filled with books, it’s hard to keep track sometimes.

If you are a fan of this series or even the Canadian television show adaption, Bitten, let’s discuss it!

Who is your favorite character in the book or television show? Paige, Elena, Clay, Jeremy?

Are you sad the show is ending?

Which one of the books is your favorite? 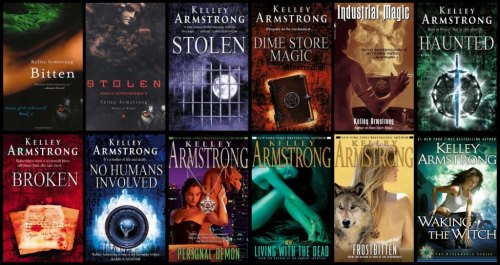